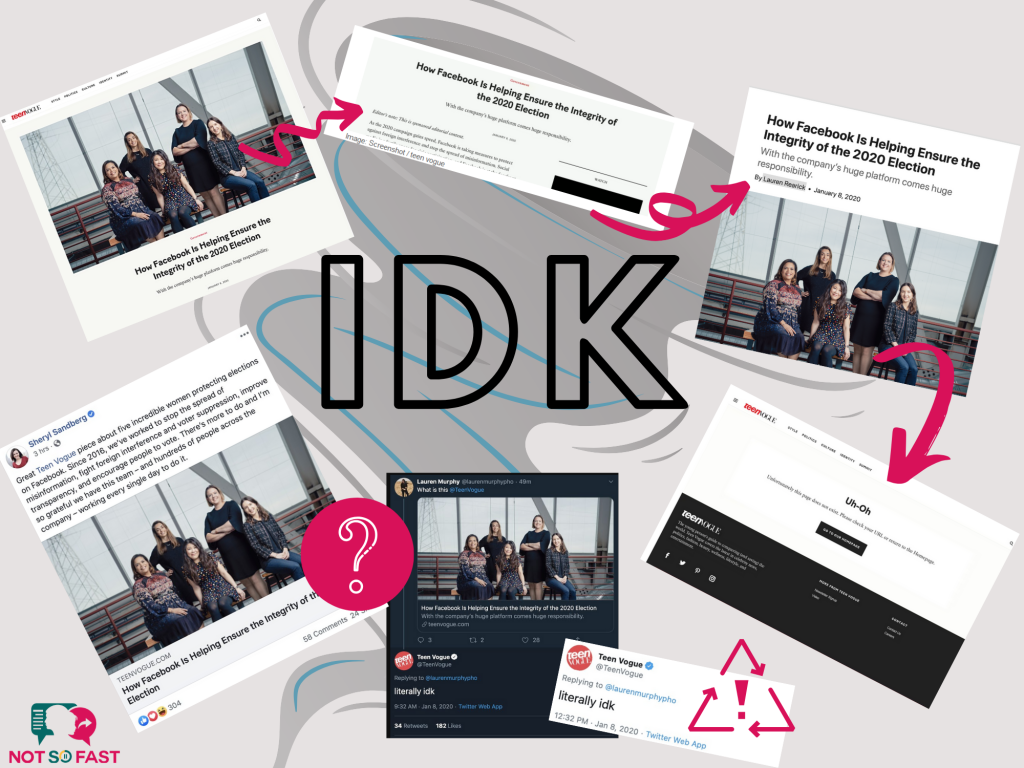 Last week Teen Vogue and Facebook found themselves in hot water when Teen Vogue published an editorial on their website titled, “How Facebook is Helping Ensure the Integrity of the 2020 Election.” You can find the original post here.

The headline alone raised eyebrows. Facebook isn’t generally thought of as helping ensure the integrity of elections. Here are two of MANY articles about Russian Influence and Facebook Ads that have been circulating since even before congress published all the Russian Facebook ads used to try to influence the 2016 election.

Things got confusing as edits were made labeling it as an ad, then deleting that, and adding a byline, then removing the byline, and finally deleting the whole post entirely! The New York Times did a good job covering this timeline. 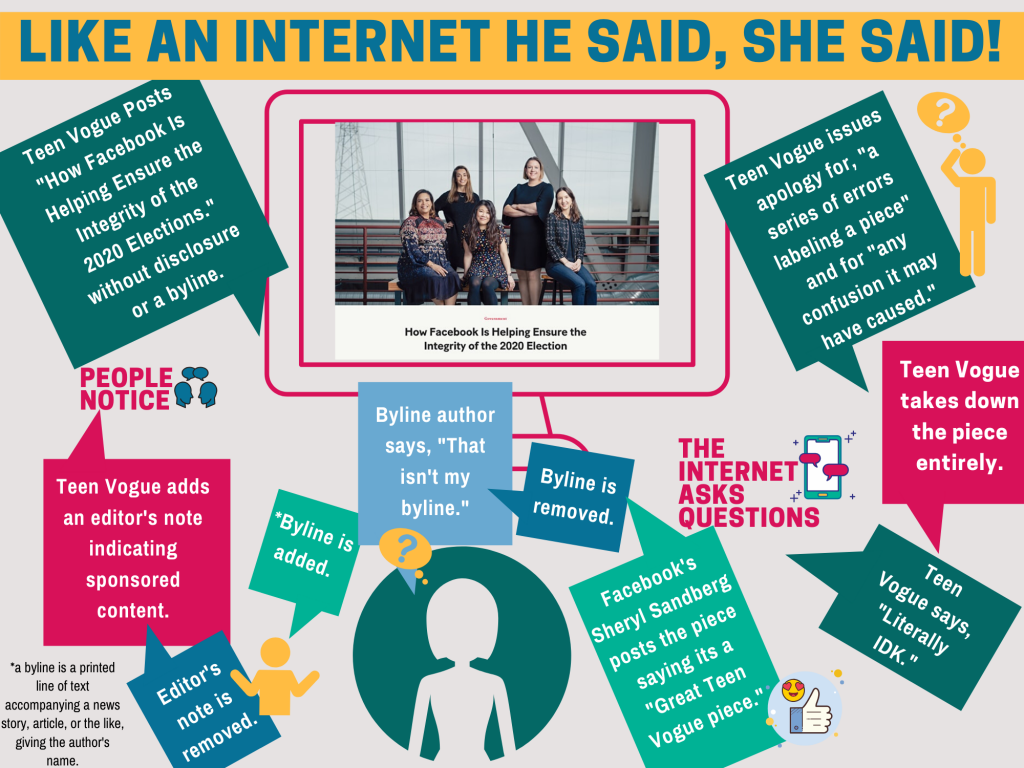 Well, it turns out the Teen Vogue article was a sponsored post, which means that Facebook PAID Teen Vogue to run this article. While the information was presented as “news,” Teen Vogue initially failed to disclose that it was an advertisement.

Why This Is a Problem.

Readers want to trust that the information put out is representative of the publication’s true feelings, that it is factual, and that there aren’t any ulterior motives behind content. Knowing what kind of information we are looking at plays an instrumental role in our ability to be media literate.

When a post is sponsored, the brand paying for the sponsorship usually:

Lindsay has some first-hand experience with this:

“I know how brand deals work because I have participated in many of them. Some notable ones are Hello Fresh, Jimmy Dean, Kelloggs, Daily Harvest, Ancestry, Best Fiends— the list goes on. Brands provide you with talking points, and they get to approve the content before it is published. Here’s the kicker: you NEVER say anything BAD about the brand that is paying you. Sometimes, you can’t even talk about competing brands for several months. Brands and creators know that you legally have to disclose when you are being paid for content. #AD, anyone?”

If you are reading something presented as a legitimate news article, it should be:

Sponsored content (even if presented as a legitimate news article) legally must be labeled as such.

According to the Washington Post, “Sponsored content, which often mimics the style and tone of news articles, has become increasingly common and profitable for U.S. outlets, occasionally raising thorny questions about transparency and the separation of a media organization’s business and editorial departments.” The Verge shared their take on brands buying sponsored content as well, saying, “The whole reason you run sponsored content is control: you script the questions and edit the answers to your liking.”

The Teen Vogue/Facebook article started trending online when users recognized something that was off and questioned it. Given Facebook’s reputation and the prevalence of sponsored content, the “shocking” headline may have HELPED critical thinkers examine the article further.

What we can learn from this?

Just because you trust a source, doesn’t mean you should trust it blindly. As consumers, we need to slow down, take our time, pay attention, and consider where the information is coming from and why we are seeing it. There are things to look out for that don’t quite fall into the category of misinformation or disinformation.

Facebook’s reputation has been tanking for many reasons, and they are trying to attract a younger demographic. According to a Worldwide Facebook Data report from October 2019, only 16.8% of Facebook users are between the ages of 13 and 24 (an audience Teen Vogue already has the trust of). There is also the backlash from Facebook’s involvement in the Russsian Disinformation Campaign during the 2016 election. Several studies have concluded that Facebook had a big impact on the 2016 election. Whether that was for better or worse is up to you to decide.

Facebook representatives were actually at a congressional hearing about synthetic and manipulated media while this was going down. That sure seems like a pretty clear, “OMG, we need to fix our reputation!” motive.

You should ask yourself:

*It is important to remember that not all motives are “bad.”

Teen Vogue is well respected and has a broad reach with 3.4 Million followers on Twitter and 2.8 million followers on Instagram. As a trusted source to a younger audience, it’s easy just to believe everything they share. The key to influence working is trust. So for those who consider Teen Vogue as a reliable source,

The Verge said, “Facebook probably erred by commissioning sponsored content about platform integrity. The thing about your integrity efforts is that you want to promote them with, you know, integrity. Slipping them into online magazines as articles with a small-font disclosure that the thing was bought and paid for undermines the very credibility you were hoping to bolster.”

Time to test out your critical thinking skills! We’ve done a brave thing and opened up the comment section on the internet! What do these questions make you think? Do you have any other questions?

Any other questions come to mind?

Read some of these articles yourself:

This post was written by NSFC co-founder, Bailey Massey. Bailey is a Speech-Language Pathologist, mother of one, loves horses, and hates bananas.