The First Amendment in Public Schools

Sometimes it is hard enough to remember that the First Amendment limits government institutions and government agents only, without limiting private individuals or institutions. And if you need a reminder, you can always go here!

There is also a general difference between adults and minors. Students in grades k-12 are under 18 and, as a result, automatically have different constitutional rights. This contributes to the variations we see regarding the First Amendment in Schools. There are even differences between k-12 schools and college campuses and students on and off-campus.

The First Amendment also relates to school newspapers, clubs, distributing literature on campus, and petitioning officials. Over the years, justices on the Supreme Court and judges on lower courts have interpreted the First Amendment in many different ways, making it what it is today. As Justice Abe Fortas said, “It can hardly be argued that either students or teachers shed their constitutional rights to freedom of speech or expression at the schoolhouse gate.” With this in mind, we still have to remember that the goal of a public school is to educate in a safe environment to which Judge Gilbert S. Merritt said, “Learning is more vital in the classroom than free speech.” School officials must be able to ensure a safe learning environment.

Here are some precedent cases that have shaped the First Amendment in schools.

The First Amendment can be pretty confusing as rules and laws change based on the court’s interpretation. Some precedent cases have led to rules that make understanding the rights of students in public schools a bit confusing. So, we hope to simplify things a bit. 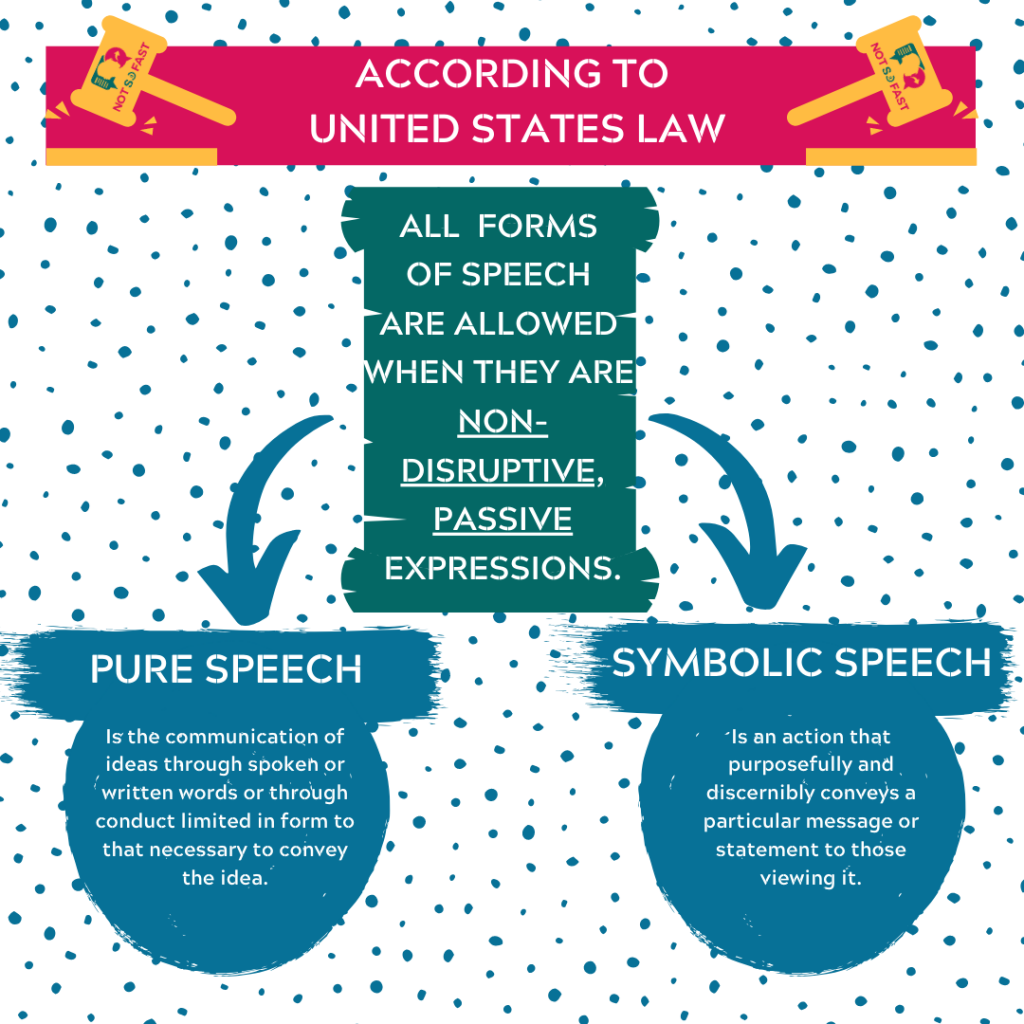 Although often debated and controversial, political speech is allowed and thought of as essential to the development of constitutional democracy.  This means when it comes to dress codes, schools can have a dress code, but as symbolic speech is seen as “akin to pure speech,” schools cannot prohibit typically allowed articles of clothing featuring a message. The symbolic speech is protected as long as it is a “nondisruptive, passive expression of a political viewpoint.” 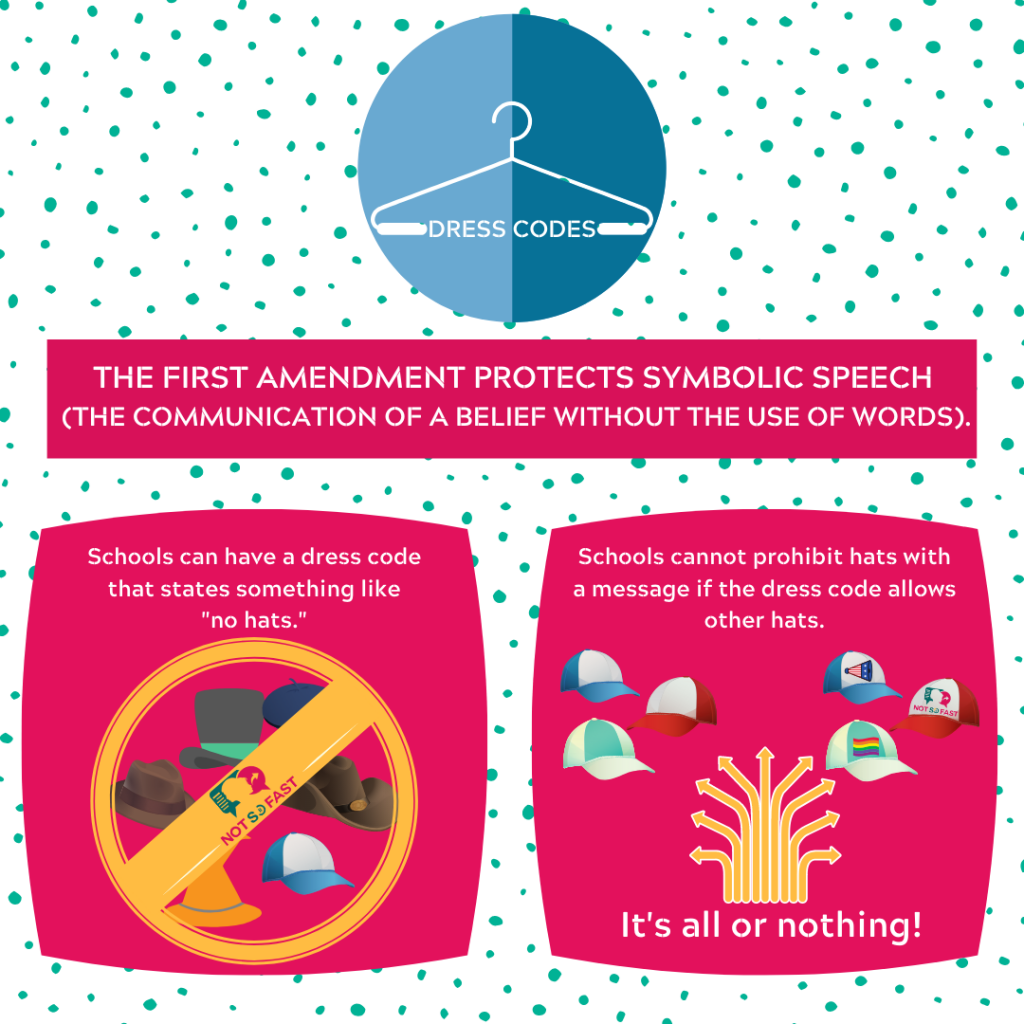 However, within a school, if a student’s pure or symbolic speech is unrelated to any political view and considered to “undermine the school’s basic educational mission,” then according to the Supreme Court’s decision in Bethel School District vs. Fraser, the school has the right to censor. Justice Byron White said, “A school need not tolerate student speech that is inconsistent with its basic educational mission even though the government could not censor similar speech outside of the school.” 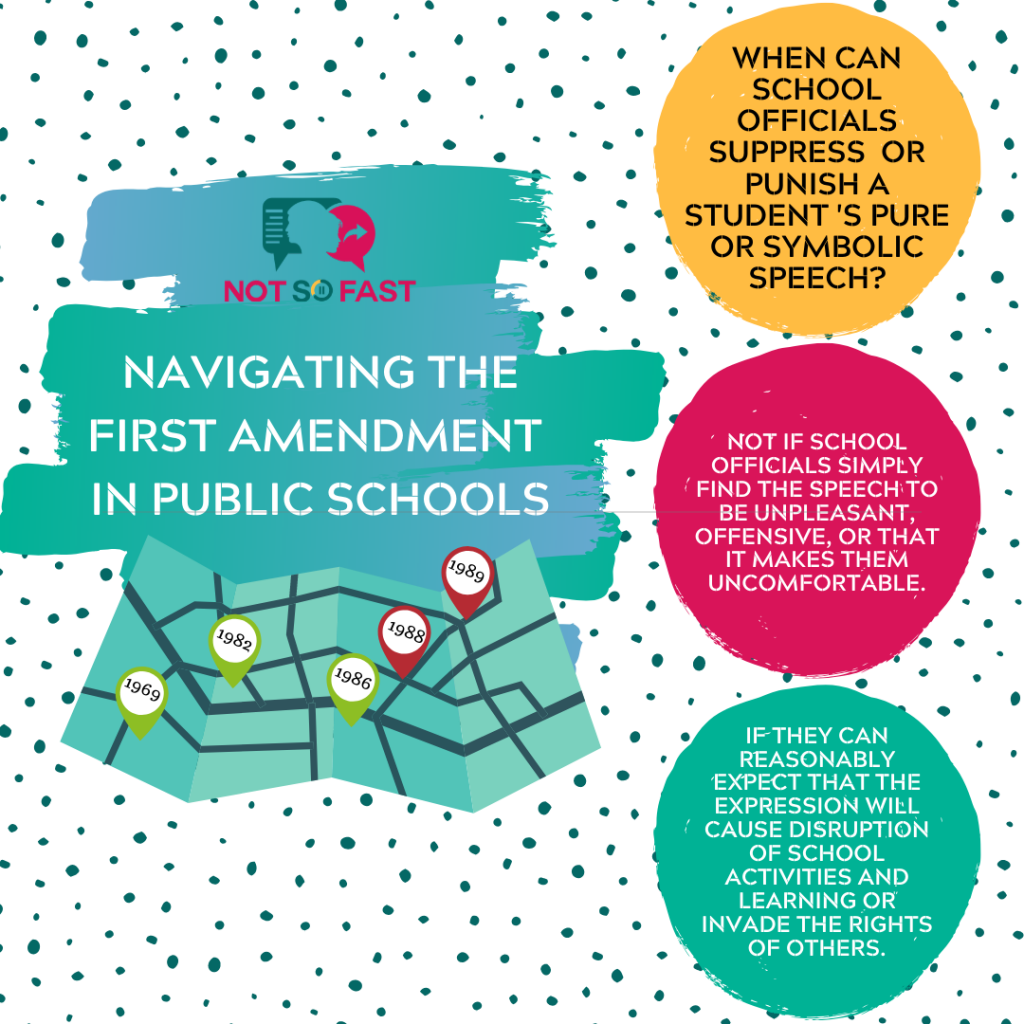 What does that look like in Public K-12 Schools?

Schools do have control over the content of school-sponsored assemblies, and there is a duty to instill moral values and encourage civility. They are not allowed to censor expressions unless they can reasonably expect that the speech or expression will cause a substantial disruption of school activities or invade the rights of others.

Schools can limit the time, place, and manner in which school activities can be disrupted. Similarly, in regards to walkouts as we have recently seen throughout the country, schools can also regulate student protests that are viewed as disruptive. But the punishment should be consistent with other attendance and truancy punishments. 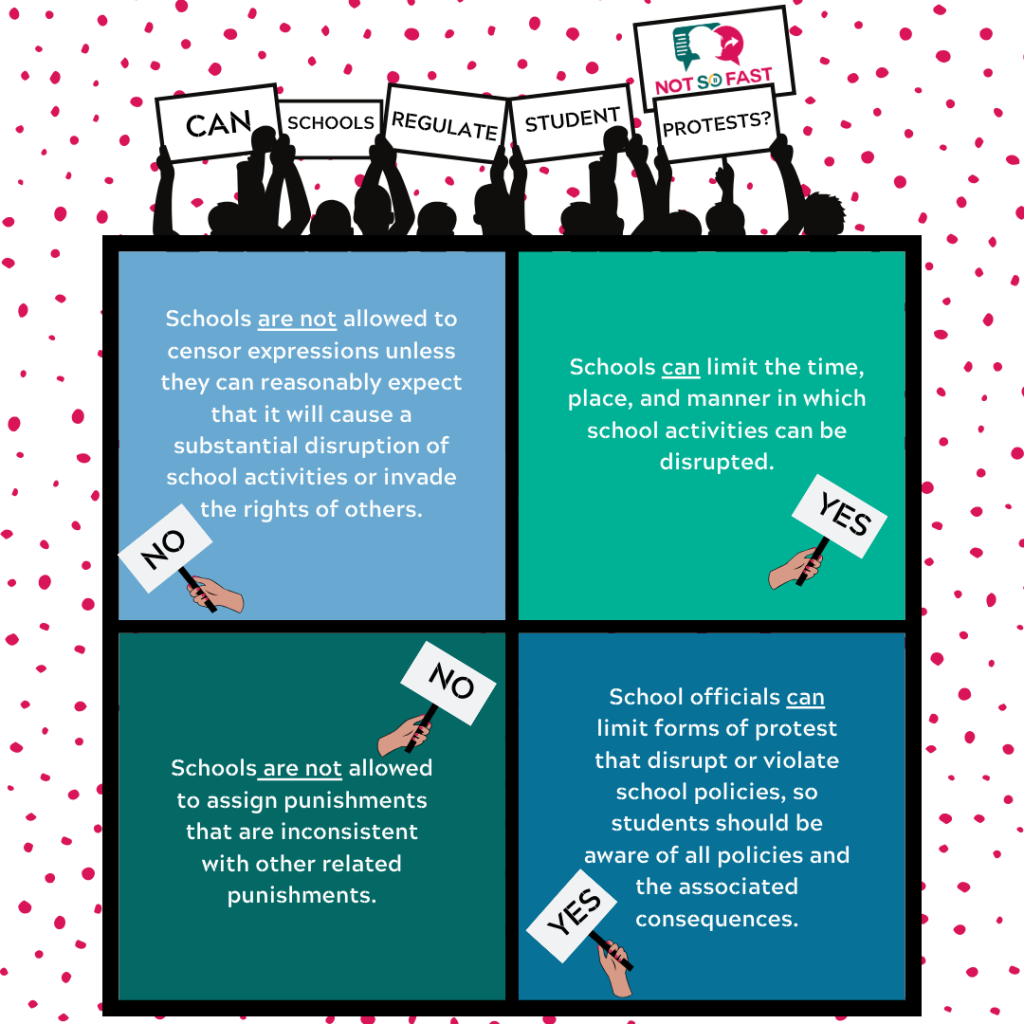 What about school newspapers and publications?

Historically, the courts have decided that schools are allowed to censor in cases of literature urging students to stand up and fight, share hoaxes or boycott registration. In regards to school publications, Hazelwood School District v. Kuhlmeier decided that schools can censor for educational purposes. This includes anything that “impinges on the rights of other students,” or even if it is “ungrammatical, poorly written, inadequately researched, biased or prejudiced, vulgar or profane, or unsuitable for immature audiences.” This decision has been controversial, and some states even have “anti-Hazelwood laws” that grant student journalists more protection. Even though the supreme court has often sided in favor of school districts, there are some cases where censorship has been found to violate the First Amendment.

There are some cases however that find the censorship to be a violation. In 2003, in the Darcie Draudt v. Wooster City School District case, the court did find an attempt to censor the school newspaper in violation of the First Amendment.

Do you think most students would challenge the authority of principals and school boards or do you think they would accept the censorship?

Censorship is the suppression of ideas and information, and courts have decided that students have the right to receive information. Books are one of the many ways information and ideas are shared and are therefore protected by the First Amendment. Removal of books from a school can be seen to infringe on student rights. But, as always, there are exceptions. 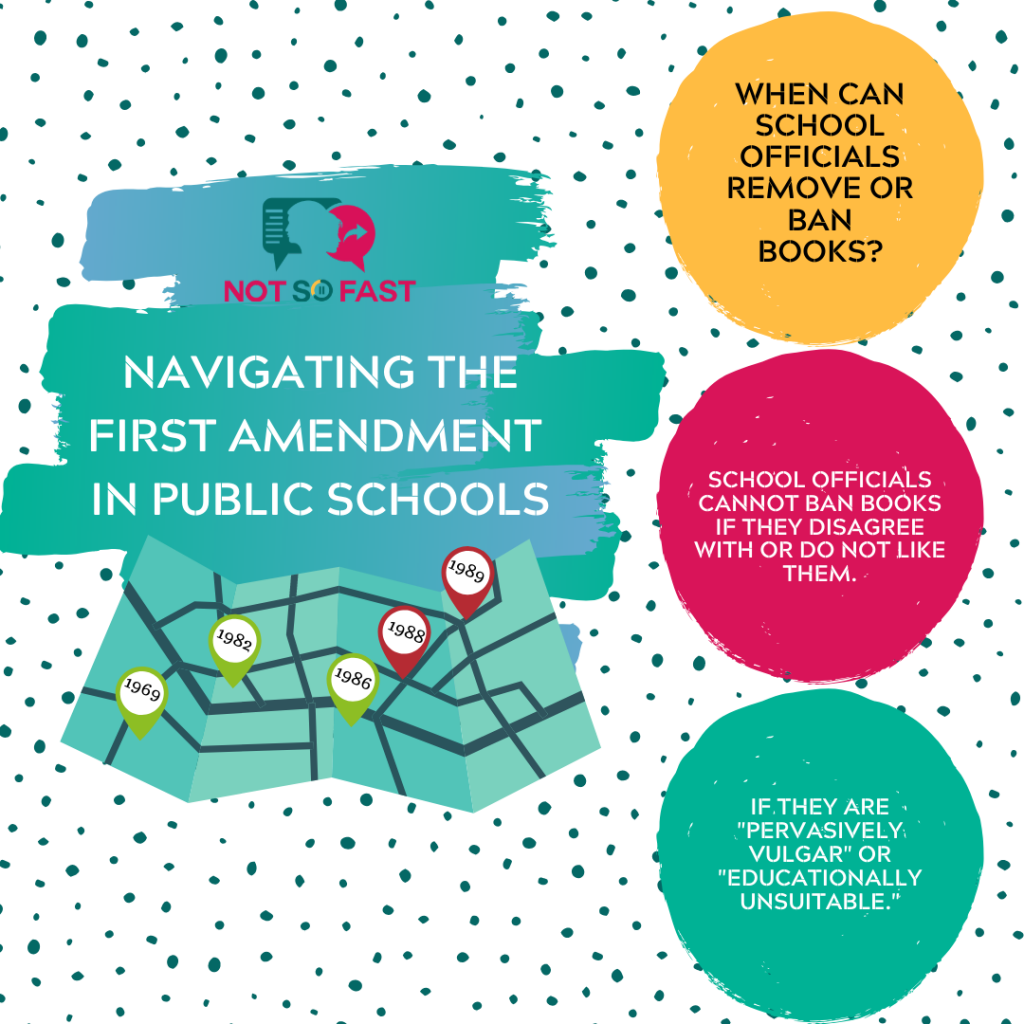 What about off-campus speech?

When a student is demonstrating various forms of expression, where they are matters. Just as there is a difference between public and private settings when it comes to the First Amendment, there is also a difference between on- and off-campus forms of expression. School officials don’t have the authority to regulate off-campus speech or activities, and that includes what happens on the internet. However, many states have laws targeting cyberbullying which apply whether or not the speech takes place on-campus or off-campus. In Tinker v. Des Moines, the courts implied that school officials could punish students if their speech invaded the rights of other students.

Do you think this should apply to cyberbullying?

How do you think the internet and social media have impacted free speech?

What do you think about these cases and how they were interpreted?

Have you ever encountered something you thought violated your First Amendment rights?

A million thanks to Abby Valencic for editing and fact-checking!

If you are interested in learning more about the First Amendment in public schools check out some of our sources.