Journey from Fact to Opinion: What could possibly go wrong?

Take a look at the picture for a few seconds.

Thanks to the internet and social media, fewer people are forming opinions based on the same facts.

Look at the picture. That’s the fact: the lines, the form, the shading, the white space. Based on the fact of the picture, you form an opinion: it’s a rabbit. Or, it’s a duck.

Either is a perfectly valid opinion, because there’s support for each in the fact of the picture: there is the left/right eye, and there is the beak/ears, and there are the feathers/fur. Difference of opinion happens (rabbit or duck), but the opinions are based in fact.

Just putting the picture into words is an opinion, because it’s a written interpretation of the picture.

Once you’ve made sense of the picture — given it an opinion — it’s hard to see the fact without an opinion. Think of an opinion like an instagram filter: the opinion literally colors your view of the fact. It gives the fact a duck-colored slant. Maybe you can switch filters (change opinions). But with opinion filters, there is no “normal” option.

You filter facts with opinions all the time! When you tell a story, your recounting of last night’s events is a filtered version of the facts: maybe you emphasize the funny parts, or the parts that stood out to you. Maybe you forget to mention the boring bits. And to ensure your story is an actual story, you definitely separate what happened into discrete events, perhaps even highlighting one to be the “punchline” or the climax. The reality of what happened last night does not include camera cuts like that, but you added them to construct a story. Your opinion of what happened was based in fact, but it was filtered through you.

If it’s so hard to see the fact “unfiltered,” then how can you tell when the filter is especially deceiving? How can you tell the face-tuned pictures from the ones that are only slightly brightened up?

The trick is to base your opinion (filter) in the fact of the picture: the eyes, the beak, etc. A filter that ignores the picture — that oversaturates or masks it — is where you run into trouble. 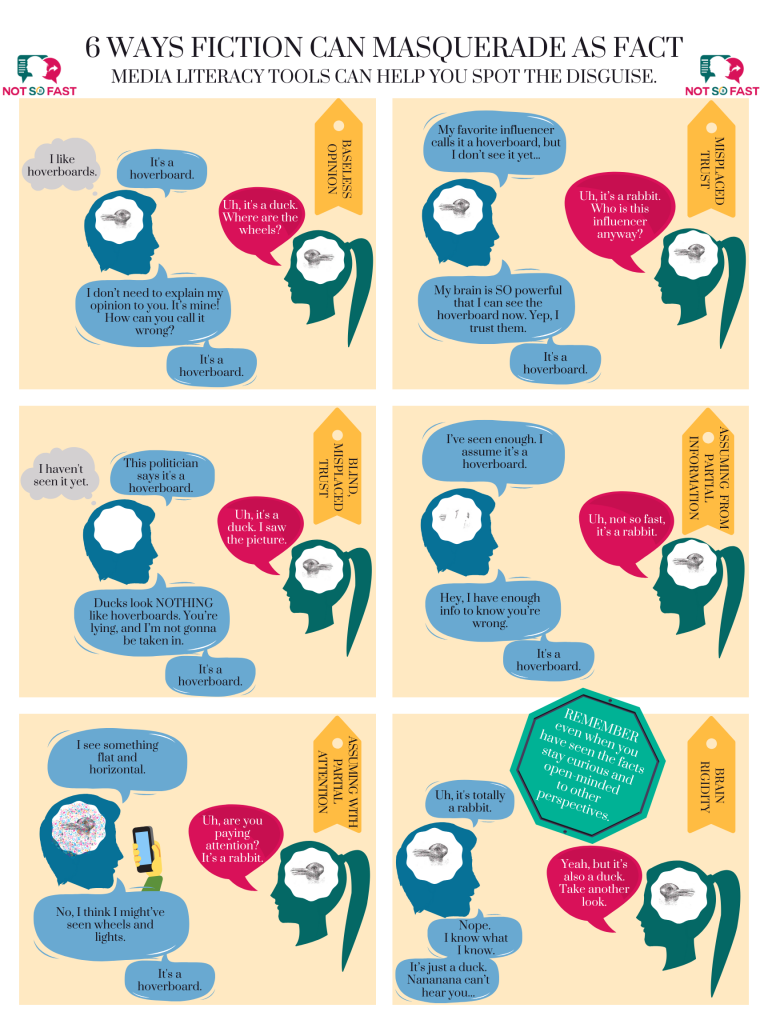 Assuming from Partial Information: Bad things happen when you assume…Here’re some real-life, syndicated examples of what happens when people assume from partial information.

Brain Rigidity: Our brains can shift from knowing what we see to a closed-loop: knowing what we know. You just did it when you voted on the picture! If you saw the duck first, how long did it take to see the rabbit instead? In some situations, our brains might even be stuck on the hoverboard: if you were emotionally attached to the hoverboard idea, how much harder would it be to see the rabbit-duck at all?

In 2016, THE DRESS burned through the internet like wildfire. The internet exploded because people had trouble accepting that BOTH perceptions of color were true.

Assuming From Partial Attention: Thanks to our shorter attention spans, we can make poor assumptions. Thanks, social media! Let’s say you’re trying to look at the rabbit-duck. But distractions are a thing: messages, other pictures, ads, duck-free rabbit holes… given all that distraction, how well do you know the fact? Even if you know the general shape, could you defend it without making up the finer details – spreading misinformation in the process?

Who do you trust to know the facts?

The “Misplaced Trust” conversations above only occur if we trust unreliable sources. What sources would you trust, sight unseen, if they cried “hoverboard”?

Your favorite influencer?  Your best friend? Your preferred news organization? Your brother or sister? A state representative? Your teacher? A meme you agree with? Your parents? A politician? A peer you look up to?

If the sources care whether the “hoverboard” opinion is fact-based, then they’ll appreciate your fact-checking efforts.

The Consequences of Overfiltered Facts

The “hoverboard” people and “rabbit-duck” people have difficulty communicating, because it’s frustrating and devolves into anger on both sides: uncivil discourse.

Problems start when an opinion – the hoverboard – has no basis in fact. Productive debate can’t happen when two parties don’t even agree on the picture’s shading. So, to ensure you only form opinions based on fact, use your media literacy skills! You can investigate if there are any hoverboards masquerading as rabbit-ducks.

You see the “hoverboard” claim. You see the “rabbit” and the “duck” claims, too. But when you think about fact-checking them…

Yeah, We’ve all been there. Fact-checking takes SO much time compared to just hitting “like” for posts that “make sense.” After all, spotting the “hoverboards” takes constant vigilance! It can get exhausting.

No one has time to fact-check EVERYTHING they see on the internet. Or maybe someone does, but they might go a bit insane after a week – and who could blame them?

The Power of “I Don’t Know”

The point is, I do not want to go insane. So every time I encounter a potential hoverboard that I don’t want to investigate, I have the power to settle for: I don’t know.

If someone asks me my opinion on the Target2 mechanism, I say: I don’t know.

Confession time: How many of us are guilty of doing the “I don’t know enough, BUT…” and then giving an opinion anyway? This does not count. We all have our vices! As for me…I’m working on it too, okay?

For some great examples where an unadulterated “I don’t know” would’ve come in handy, watch this, this, or this! (And before you judge the people on camera, keep in mind no one likes being caught out of the know. Plus, as a late-night show segment, its bias is to show the most entertaining interviewees.) How are the interviewees similar to the actors in the rabbit-duck scenarios?  I see a LOT of anchor and confirmation bias used as crutches for lack of facts.

Here are a few things to think about.

The incredible Melissa Lesh contributed to this week’s blog post. She’s a freelance editor who likes to fact-check for fun. Check out her Instagram and website!